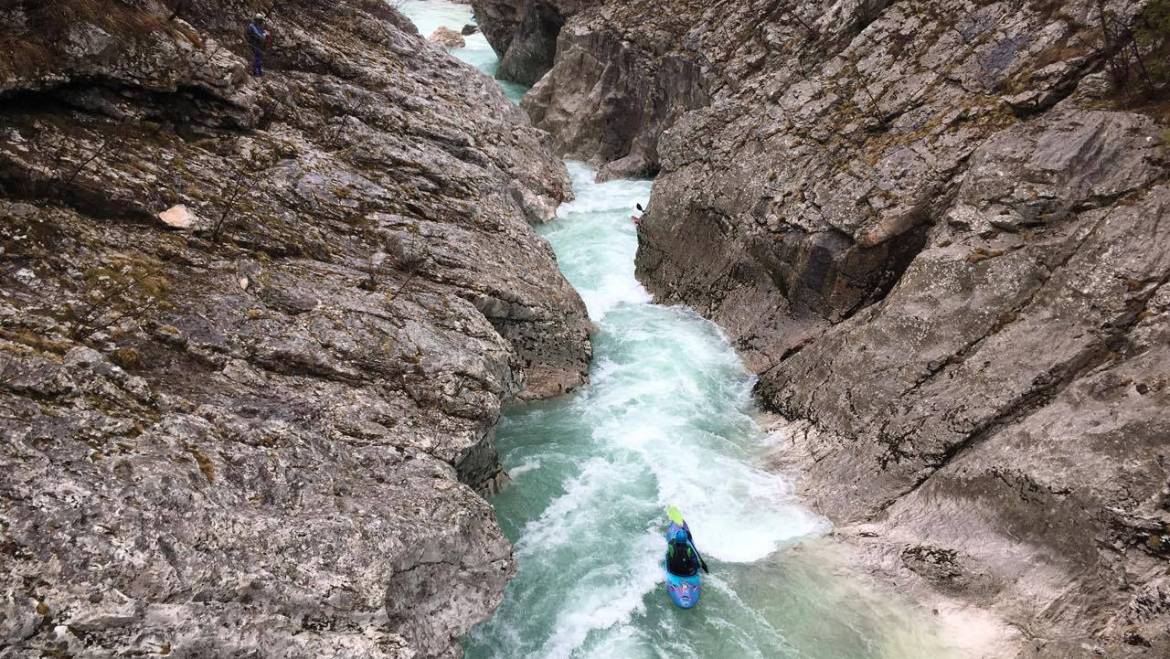 Soča is one of the favourite places for kayakers. It offers a diverse choice of the whitewater sections, that brings lots of kayakers into the valley, especially on the most popular parts of Soča, from Zmuklica to Kobarid/ Tolmin. On this part of Soča, kayaker can paddle the whole scale of river difficulty, from beginner’s  level 1-2 (Čezsoča- Boka), all the way to level 5-6 (Trnovo ob Soči 2- Otona). This part of Soča river is floatable troughout the whitewater season (15.3.- 31.10.), so kayakers can always find the best part of river for themselves.

There are also some parts of Soča river, that are not floatable all whitewater season long, but only at a certain water level. The upper Soča with it’s tributaries are definitely  good reason why kayakers love the rain so much. In the upper part of the valley, there is section of Soča called Bunkerji – Bunkers  (Velika Korita- Zmuklica) and a tributary, Koritnica river (Kluže – Sotočje).  After heavy rainfall, when the Soča river rises above 15 m³/s (measured at Kršovec)   and Koritnica above 12 m³/s (measured Kal Koritnica- Koritnica), this two spots should defenitely be on kayaker’s must paddle list. Optimal water levels in the upper valley are rarity, so once the forcast is ˝good˝ , kayakers keep coming into the valley from all sides, just to experience the unique adventure. Some kayakers also visit this two places in lower water levels, but at that time, the float is rocky and uncomfortable. I will describe Bunkers and Koritnica kayaking in optimal flow. Exit from the canyon

The entry point in Lepena gives us about a kilometer of warming up before reaching the first and the most difficuly rapid called Bunkers, that starts just under the first footbridge. This rapid is surprisingly long, with many big rocks which dictate our path down the stream.
There are few easy rapids after Bunkers, before we reach the Plaz- Avalanche. This rapid is simple in the high water levels, but in the low levels, very rocky. Technically it is an easy one and scouting the rapid is a big help. After passing the Plaz, there is again a calmer part that we can spice up with search for a new lines. Slowly we will approach to the last rapid, the canyon Kršovec, that is recommended to scout before entering. Important is to check the entry to the canyon (easier in higher flows) and the part under the footbridge (easier in lower flows). If the entrance is easy, then expect more difficulties in the second part of the canyon, and the opposite. In case you deside to walk around the canyon, stop before the canyon on the left side, and follow the path downstream for about 5 minutes, where you will reach the exit of the canyon. The exit of the canyon is at the entery point Zmuklica, from where we can continou few kilometers on the easy rapids to the exit point Čezsoča.

Koritnica is a smaller tributary of Soča river, coming from the valley of Log pod Mangartom. The entry point is just under the gorge at the Kluže fortress. Some kayakers paddle it also at 8m³/s, but with 12m³/s, it gets fun and comfortable. You will not see the depth of the river, it is going to be a bit brown from the big rainfall. Because of that, do not count to much on the sufficient depth and hold your paddle hard.
Koritnica is completely different then Soča river. It is narrow, fast, low, a real creek with endless rapids similar difficulty. It is rather intensive and demands an experienced kayaker- swimming in it can be very unconfortable and painful. In higher flows (between 25m³/s and 40m³/s) the rapids are technically not more difficult, the river gets very fast, with just few stops possible. Rapids continue one after another all the way down to the confluence of Koritnica and Soča river (Sotočje).

200 meters under the entry point Kluže is a first canyon, that should be scouted before entering. The canyon is narrow and it is very possible that some trees are stuck in it. After the canyon there are many class 3 rapids, where kayaker can choose many lines to paddle, making his own tour harder or a bit more simple. Once we pass the concrete bridge with a main road Bovec- Trenta, we enter the second canyon. It is not more difficult then the rest of the section, but we can be surprised with the strength of the flow in this narrow place.
Few more rapids and we will reach the camping village Vodenca, where is a great last rapid that remind of the slalom course. You can have a lot of fun there, and after continou on the Soča river down to the Čezoča to the exit point.

You can login using your social profile
Problem with login?